When we get to the cabin, it takes all of ten minutes or less for the chickadees to find newly filled birdfeeders hanging off the deck. Everything about birdfeeder construction screams, “For birds ONLY!” The perches are tiny, the feeding ports are tiny, the food is tiny. But often other animals think the feeders are meant for them as well.

A day or two after we saw the bear cub, Jim got up in the morning and opened the door to go outside. I was still in bed when I heard him say, “Omigod!”

Thinking something awful had happened, I jumped up. “Jim!”

“There’s a bear on the deck!” he said, as he ran back inside for the camera. “It was at the birdfeeder!”

We both ran outside in time to see it take off into the woods. “It must have gotten scared when it heard me open the door. I saw its black ass skitter down the front of the deck.”

“You know, like Lula in the Stephanie Plum novels. That sounds like something she would say about herself.” Jim rolled his eyes.

Janet Evanovich’s Lula is a hooker turned wannabe bounty hunter. She is Black, large, and self-deprecating. The only thing the bear was missing was Lula’s spring apple green spandex capris and hot pink stilletto heels.

This summer I downloaded Plum Spooky from our library’s audiobooks collection and we listened to it on our first trip to the cabin. It was the first book I had “read” by Evanovich. I quickly learned that one should never try to drive and listen to one of her novels at the same time. I drive the speed limit on the interstate plus a little extra to make up for road construction delays. Keeping the car in my lane while laughing hysterically at Lula’s dialogue was like trying not to swerve on ice when you hit the brakes. 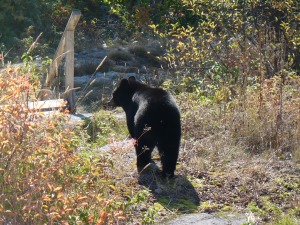 Lula the bear stayed around our place for much of the week. She cleaned out the suet feeder before she went for the sunflower seeds. Evanovich’s Lula loves high carb food. Can you see the similarity?

The day before we left to come home, we kept hearing car horns honk at our neighbor’s. He called to say that Lula was at their place and wouldn’t leave. The honking just put her into the edge of the woods that separate our properties. Jim told him to throw a slab of meat on our deck the next day and that should solve his problem. We were shutting our place down for the season and would be gone.

*Lula should not be confused with the bear cub from my previous post – the child with the thyroid problem.

One thought on “Lula the Bear*”